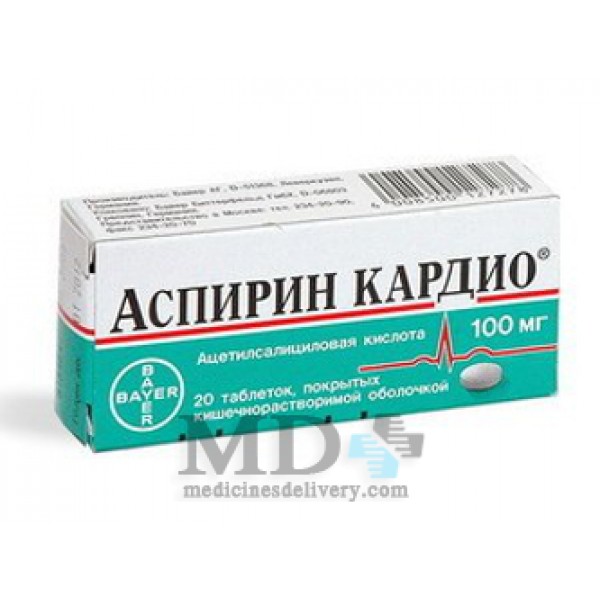 Mode of action:
Mode of action of Aspirin Cardio manifest influence exerted acetylsalicylic acid ( the active ingredient ) in the body. Aspirin Cardio refers to a group of non-steroidal anti-inflammatory drugs ( NSAIDs). Its effects on the body due to the ability to block prostaglandinsintetazy - an enzyme involved in the biosynthesis of prostaglandins. Inhibiting the production of inflammatory hormones ( prostaglandin ) , Aspirin Cardio has analgesic , antipyretic , anti-inflammatory effect. Aspirin Cardio retards aggregation ( clumping ) and adhesive properties of platelets. This is due to inhibition of the biosynthesis of thromboxane A2 in platelets . After receiving Aspirin Cardio , antiplatelet effect is detected during the week ( less pronounced in women than in men) .
When exceeding a daily dose of aspirin Cardio than 6 g, marked inhibition of the biosynthesis of prothrombin into hepatocytes in vitro prothrombin time lengthens .
Aspirin Cardio markedly increases the ability of plasma fibrinolysis and to reduce the specific amount of 10, 9 , 7, 2 coagulation factors which are also called vitamin K- dependent. Analgesic effect is not expressed clearly , and due to lower susceptibility of the nerve cells to the factors of irritation by reducing the total number of inflammatory mediators that act native irritation.

Indications for use :
Indications for Use of Aspirin Cardio apply to all diseases for which there is an excess risk of thrombosis or .
Aspirin Cardio used as antiplatelet drug therapy in almost all forms of ischemic heart disease, prevention of coronary heart disease (with risk factors ) , unstable and stable angina pectoris, myocardial infarction ( prevention of thrombotic complications) , operations on the heart and blood vessels .
In neurological practice in transient cerebral blood flow, cerebral ischemia . In cases of venous thrombophlebitis of the lower limbs (prevention of thromboembolism ) , recurrent pulmonary embolism , pulmonary infarction .

How to use:
Aspirin Cardio is taken before a meal without chewing, drinking plenty of fluids . Aspirin Cardio take once in 1-2 days. Long course of treatment , established by the attending physician.
The usual dosage is from 0.1 to 0.3 g / day. Typically, the first prescribed Aspirin 0.3g Cardio night . After a therapeutic effect , confirmed by coagulation tests , switching to maintenance therapy - 0.1 g per day.

Pregnancy :
It is better to refrain from taking Aspirin Cardio during pregnancy because it can easily cross the placental barrier. At 1 and 3 trimester contra categorical. In the 2nd trimester should be weighed against the value of the expected therapeutic effect, with the risk of fetal malformations .
During lactation Aspirin Cardio contraindicated .

Interactions with other drugs:
Not recommended for concomitant use of aspirin and other NSAIDs Cardio ( salicylates and pyrazolone ), because it causes a potentiation of side effects and reduced therapeutic efficacy. Co-administration of an anticoagulant with direct (heparin ) and the indirect action, increases the risk of hemorrhage .
Aspirin Cardio increases the number of lithium ions in the blood, concurrent therapy with metal salts . 2-3 days during coadministration with digoxin , increases in plasma levels of the glycoside . After the abolition of Aspirin Cardio concentration of digoxin in the blood to normal no earlier than 48 hours
Aspirin Cardio promotes water and sodium retention in the body , reducing the therapeutic effect of diuretics and antihypertensives . Co-administration of cyclosporin with antibiotics increases the number of nephrotoxic effect. Glucocorticoids increase the toxicity of Aspirin Cardio . Between doses of methotrexate and Aspirin Cardio needed a break for 24 hours in order to avoid an increase in the toxicity of the drug.

Overdose:
Are three degrees of severity of the overdose .
The first degree occurs when a single dose of Aspirin Cardio less than 0.15 g / kg of patient weight . Symptoms : dyspepsia , headache, vision disturbances , fever . The second stage occurs when a single dose of aspirin Cardio from 0.15 to 0.3 g / kg of patient weight , and the third in the case of coupon more than 0.3 g / kg.
If poisoning is used gastric lavage and oral sorbents, laxatives, symptomatic treatment . Necessary to control the pH of the blood and the introduction of sodium bicarbonate in cases of displacement of homeostasis in the acidic side . Hemodialysis and mechanical ventilation is used in severe cases , according to testimony .

Storage:
Aspirin Cardio is kept at a temperature not exceeding 25 degrees Celsius in the reach of children.

In addition:
During treatment with Aspirin Cardio in patients with chronic liver disease and kidney failure, recommended laboratory monitoring function of these organs . Control of coagulation parameters is shown in the cases of violation of the coagulation of the blood - antisvertyvayuschey . The presence of fecal occult blood is carried to patients who had a history of ulcerative lesions of the stomach and duodenum.
The course of treatment Aspirin Cardio long . Doctor set the dosage and duration of use. You should not take Aspirin Cardio own. Antisvertyvayuschey Aspirin Cardio activity persists for several days after discontinuation of the drug , which should be considered in the surgical treatment . Older people are more sensitive to a drug overdose .
Cardio Aspirin has no effect on the concentration and attention. 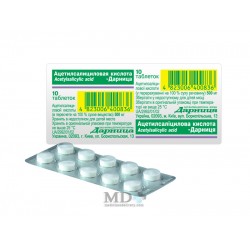 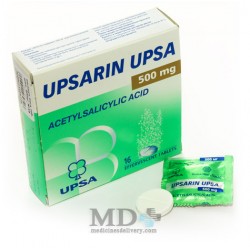