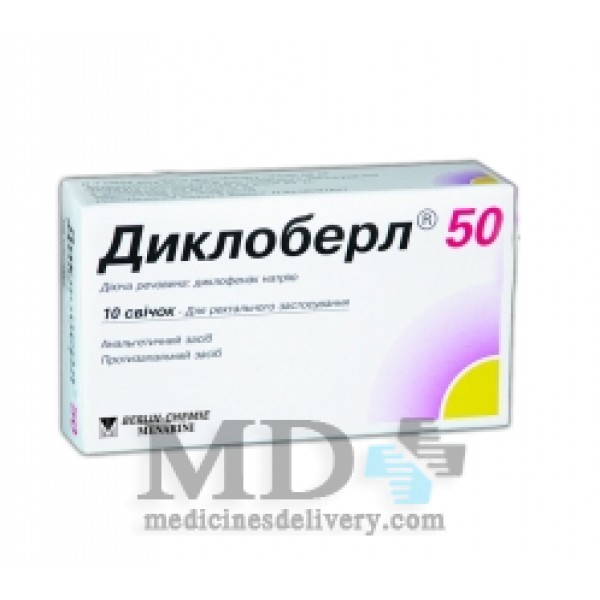 Mode of action:
Dikloberl - steroidal anti-inflammatory agent, a derivative of phenylacetic acid. The active ingredient is diclofenac sodium. Has a pronounced anti-inflammatory effect by inhibiting the synthesis of prostaglandins. Has antipyretic, analgesic and anti-edema (swelling of the tissues during inflammation) effect. Reduces the adhesion of platelets by the action of collagen and ADP.

Approximately 30% of diclofenac is metabolised. The metabolic products are eliminated in the intestine. Inactive metabolites produced by the conjugation and hydroxylation of hepatocytes are eliminated by the kidneys. The half-life of 2 hours and not dependent on renal and liver. Binds to blood proteins 99% of the drug.

How to use:
Dikloberl 75 for parenteral injection is administered in the gluteal muscle (deep intramuscular injection). The daily dose - 75 mg (1 ampoule). The maximum daily dose - no more than 150 mg. If you need long-term treatment dikloberlom prescribe oral or rectal forms.

The tablets are taken orally dikloberl 50 during the meal (to avoid irritating effect on the mucous membrane of the stomach), with a small amount of liquid. Do not chew. Daily dose - 50-150 mg - divided into 2-3 doses. The duration of therapy is determined by the physician individually.

Suppositories dikloberl 50 injected deep into the rectum after a bowel movement. The dose is determined individually by the physician according to the severity of the disease. The daily dose should be in the range of 50-150 mg (adults and pediatric patients older than 15 years). The daily dose is administered in 2-3 divided doses.

Interactions with other drugs:
Receiving Frequency dikloberla against phenytoin, digoxin, drugs lithium content of the latter increases in plasma. When co-administered with diuretics and means for reducing hypertension decreases the effectiveness of the latter. When combined with potassium-sparing diuretics observed increase in the concentration of potassium in the blood.

The combination with inhibitors of angiotensin-converting factor can induce renal dysfunction. In combination with corticosteroids and other nonsteroidal anti-inflammatory drugs amplified side effects on the gastrointestinal tract.

Applications per day before or after the observed increase in the concentration of methotrexate and methotrexate amplification its toxic effects. If concomitant use of antiplatelet agents requires medical monitoring of blood coagulation (though the interaction is not detected).

In combination with cyclosporin increased toxicity of cyclosporine. Funds with probenecid slow excretion of diclofenac.

There are few reports of change of glucose in the blood serum of patients with diabetes who require insulin dose changes and antidiabetic drugs.

Storage:
The temperature is not above 25 ° C. In a dark place, out of reach of children.

After the injection, the patient should be under medical supervision for 1 hour.

The drug can affect (particularly with concomitant use of alcohol) on the ability to drive vehicles and work with complex dangerous machinery. If you need long-term treatment dikloberlom want to monitor liver and kidney function, electrolytes and blood glucose levels. 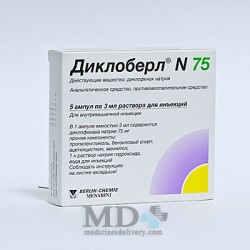 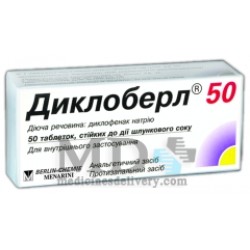 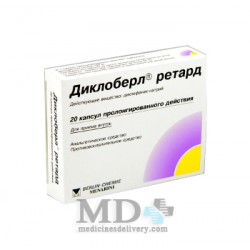 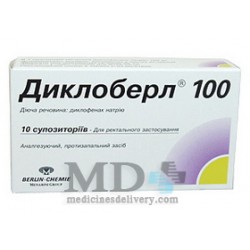