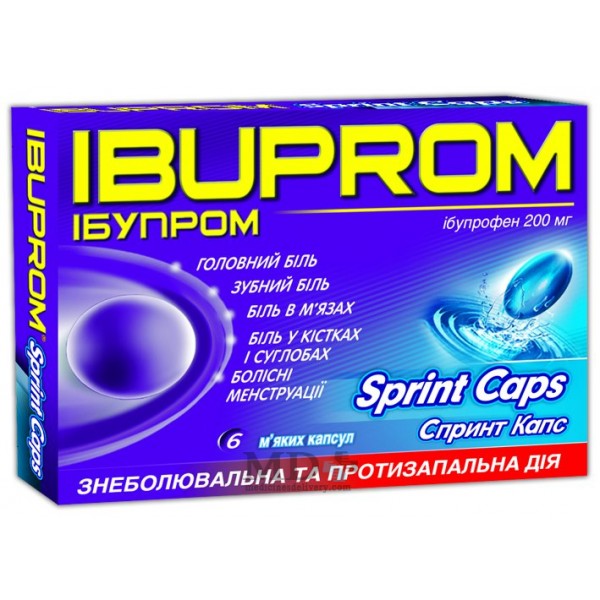 Mode of action:
Analgesic ibuprofen group of non-steroidal anti-inflammatory drugs. The drug has a strong analgesic and anti-inflammatory effects. In addition, ibuprofen reduces body temperature and fever has antiexudative action. The preparation contains the active substance - Ibuprofen - synthetic substance, a propionic acid derivative. The mechanism of action of the drug associated with its ability to disrupt the metabolism of arachidonic acid by inhibition of the cyclooxygenase enzyme which is the catalyst in the synthesis of biologically active endogenous substances of arachidonic acid. In particular, the drug inhibits the synthesis of prostaglandins E and F, as well as thromboxane. The drug reduces the amount of prostaglandins in inflammation and tissue of the central nervous system. For preparation characterized nonselective cyclooxygenase inhibition, so it is equally inhibits the activity of both isoforms of the enzyme - of cyclooxygenase-1 and cyclooxygenase-2.
Due to reduction of prostaglandins in inflammation decreases receptor sensitivity to chemical irritants. By inhibiting the synthesis of prostaglandins in the tissues of the central nervous system drug has a systemic analgesic effect. In addition, inhibition of prostaglandin synthesis in the thermoregulatory center in the hypothalamus leads to a lowering of body temperature during fever.
As a consequence of inhibiting the synthesis of thromboxane from arachidonic acid drug ibuprofen has an antiplatelet effect.

When administered orally ibuprofen well absorbed from the gastrointestinal tract, maximum absorption is observed in the small intestine, and stomach. Bioavailability is 80%, food intake does not significantly affect the degree of absorption of the drug, but may be somewhat slow absorption of the active substance. For ibuprofen characterized by a high degree of association with plasma proteins (99%), mainly albumin. The maximum drug concentration in plasma is achieved by 45-90 minutes after oral administration. The maximum drug concentration in the synovial fluid is achieved within 2-3 hours. The maximum ibuprofen concentration in synovial fluid significantly greater than the maximum plasma concentration of the drug is mainly due to the difference of concentration of albumin in biological fluids. Metabolized in the liver by hydroxylation and carbonation. The conversion in the liver metabolite 4 formed, which have pharmacological activity.
The half-life after a single application of 200 mg of ibuprofen is 2 hours, with an increase in dose half-life increases. With repeated use of the drug half-life is 2-2.5 hours. Write mainly by the kidneys as metabolites, unchanged output is not more than 1% of the drug. A small amount of the drug is excreted in the bile as metabolites.
The pharmacokinetics of the drug in elderly patients and patients with impaired liver and / or kidney does not change.

Indications for use:
The drug used as anti-inflammatory and analgesic agent for pain of various etiologies, including:
- Pain of mild to moderate intensity of the inflammatory-degenerative diseases of the musculoskeletal system, including ankylosing spondylitis, osteortroz, rheumatoid arthritis;
- Diseases of the musculoskeletal system of another etiology, accompanied by pain, including psoriatic arthritis and articular syndrome with acute gout;
- Inflammatory soft tissue diseases that are accompanied by pain of mild to moderate intensity, including bursitis, tenosynovitis;
- Pain in the muscles and joints that have arisen as a result of trauma;
- Pain of mild or moderate intensity of unknown etiology, including neuralgia, pain in the muscles, tuberculosis, toothache, adnexitis, headache;
- A drug used to reduce body temperature during fever, which are accompanied by an infectious-inflammatory diseases;
- A drug used in combination with other drugs for the treatment of infectious and inflammatory diseases of ENT organs, which are accompanied by severe pain.

How to use:
The dose and duration of treatment determined by the attending physician for each patient individually. Adults and children over the age of 12 years are usually prescribed to 200-400 mg no more than 3 times a day. Using drugs is recommended that the interval between meals at least 4-6 hours. Elderly patients dosage adjustment is not required. Patients suffering from acute renal and / or hepatic impairment, the dose should be reduced.
Sprint Capps ibuprofen is recommended to take with meals or after meals. The capsule is swallowed whole without chewing, and drinking plenty of water.

Max take ibuprofen without food. Swallow the tablet whole with a sufficient amount of water. It is not recommended to divide the tablet. The maximum daily dose ibuprofen Max - 3 tablets a day.
Ibuprofen taken with food or after a meal. Swallow the tablet whole without chewing, with a little water. It is not recommended to divide the tablet.
Patients suffering from diseases of the gastrointestinal tract, as well as having a history of gastritis, erosive or ulcerative lesions of the stomach and duodenum, it is recommended to take the drug with food regardless of the issue.
In the case of a headache as a side effect of ibuprofen is contraindicated increasing the dose of the drug to treat an attack of headache.

Side effects:
In the application of the drug in such patients had side effects:
The gastro-intestinal tract: nausea, vomiting, epigastric pain, indigestion, impaired stool, bloating, heartburn. Very rarely noted the development of gastro-intestinal bleeding, erosive and ulcerative lesions of gastric and duodenal ulcers, ulcerative colitis and pancreatitis. In rare cases, the dose of the drug may experience changes in taste.
Of the liver: hepatitis, elevated liver enzymes, liver failure.
The central nervous system: headache, drowsiness, dizziness.
Since the cardiovascular system: tachycardia. In a few cases, mainly in patients with hypersensitivity or receiving other non-steroidal anti-inflammatory drugs, noted the development of hypertension and heart failure. Increased risk of arterial thrombotic cases, including myocardial infarction and stroke.

Urinary system: edema, increased blood urea, reducing daily volume of urine. In rare cases, noted the development of necrosis of papillae.
Allergic reactions: skin rash, pruritus, urticaria, bronchospasm, epidermal necrosis, erythema multiforme. Anaphylactoid reactions, including angioedema (swelling of the face, throat and tongue, which contributes to poor air flow the airway, shortness of breath, hearing loss), and anaphylactic shock.
Hematopoietic system: anemia, thrombocytopenia, pancytopenia, leukopenia. With prolonged use may develop agranulocytosis, which is accompanied by fever, sore throat, ulcers of the mucous membranes of the mouth and an increased risk of bleeding.
Other: In patients suffering from autoimmune diseases may develop aseptic meningitis symptoms are headache, fever, nausea, vomiting, stiffness in the neck muscles and disorientation in space.

Contraindications:
- Hypersensitivity to the drug and other nonsteroidal anti-inflammatory drugs, aspirin triad: allergic rhinitis, urticaria, bronchospasm, including a history;
- A tendency to intestinal bleeding;
- Ulcerative colitis and ulcerative lesions of the stomach and duodenum, including a history;
- Severe hepatic impairment;
- Severe renal insufficiency;
- The drug is not prescribed to women in the third trimester of pregnancy and children under the age of 12 years;
- Dysfunction of the hematopoietic system;
- Disease of the optic nerve;
- A violation of the absorption of glucose-galactose, sucrose, isomalt deficit.

The caution is prescribed to patients suffering from bronchial asthma, systemic lupus erythematosus, connective tissue disorders, impaired liver and / or kidney disease, hypertension, congestive heart failure, as well as women in the first and second trimester of pregnancy and during lactation.
If necessary, prolonged use of the drug is recommended to monitor blood count, liver and kidney function.

Pregnancy:
The drug is not indicated during pregnancy.
Ibuprofen and its metabolites are excreted in breast milk. In single dose of the drug, if the daily dose not exceeding 1200 mg, there is no need to interrupt breastfeeding, but if necessary prolonged therapy with ibuprofen or the need to use a drug in high doses recommended suspend breastfeeding.

Interactions with other drugs:
The drug is prescribed with caution to patients taking other non-steroidal anti-inflammatory drugs, because while the use of these drugs increases the risk of side effects from the gastrointestinal tract and the blood system. Permitted combination drug ibuprofen with non-steroidal anti-inflammatory agents for topical application, which have a low degree of systemic action.
The drug is not administered concurrently with corticosteroids, due to the possible mutual enhancement of drug toxicity.
Ibuprofen, while the application reduces the effectiveness of antihypertensive drugs, particularly drugs of ACE inhibitors and beta-blockers.
With the simultaneous use of the drug with anticoagulants should regularly monitor the blood clotting as ibuprofen reduces platelet aggregation.

The drug reduces the effectiveness of diuretics, including decreased efficiency of loop and thiazide diuretics, while the use of ibuprofen.
The drug is not prescribed to patients taking zidovudine.
Using the drug ibuprofen concurrently with lithium therapy is marked increase in the concentrations of lithium in the blood, if necessary, co-administration of these drugs is recommended to regularly monitor the level of lithium in the blood.
With simultaneous use of ibuprofen increases the toxicity of methotrexate.

Overdose:
In the application of excessive doses of the drug in patients noted the development of nausea, vomiting, stomachalgia, headache and dizziness, and lethargy and sleepiness. With further increase in dose may develop hypotension, increasing the amount of potassium in the blood, which is accompanied by arrhythmia, fever, metabolic acidosis, loss of consciousness, coma, renal function and respiration.
Chronic poisoning drug, which arose as a result of prolonged intermittent use of high doses of the drug, noted the development of granulocytopenia, thrombocytopenia, and hemolytic anemia.

No specific antidote. In acute overdose shown gastric lavage, symptomatic therapy and chelator. In addition to the disappearance of all symptoms of overdose should monitor vital body functions, including blood pressure control is shown holding an electrocardiogram. In acute poisoning with medication is recommended to exclude the possibility of gastrointestinal bleeding and disorders of the central nervous system. In patients with acute drug poisoning ibuprofen may develop metabolic acidosis, so you need to carefully monitor the patient's condition and when the first symptoms to conduct activities to restore the acid-alkaline balance and maintain a pH in the range 7.0-7.5.
Hemodialysis is ineffective, since the drug has a high degree of association with plasma proteins.

Storage:
The drug should be stored in a dry place at a temperature not exceeding 25 degrees Celsius.
Shelf life regardless of registration - 2 years.