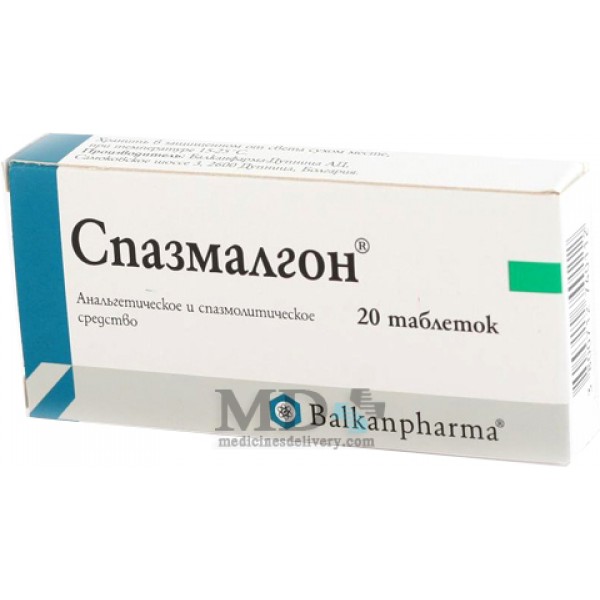 Pharmacological action:
Spazmalgon - combined with a pronounced analgesic spasmolytic activity. The preparation Spazmalgon includes three active components - metamizol sodium hydrochloride and pitofenone fenpiveriniya bromide.
The mechanism of action of the drug and its pharmacological effects are based on the pharmacological properties of the active ingredients in its composition.

Metamizole - a non-steroidal anti-inflammatory drug, pyrazolone derivative. Metamizole has a strong analgesic effect, anti-inflammatory and antipyretic effect. The mechanism of action metamizole sodium related to its ability to inhibit the activity of the enzyme cyclooxygenase, thereby disturbed metabolism of arachidonic acid and decreased production of proinflammatory prostaglandins, prostacyclin and thromboxane. Metamizole sodium belongs to the group of non-selective NSAIDs and equally inhibits the activity of both isoforms of cyclooxygenase enzyme - cyclooxygenase-1 and cyclooxygenase-2. As a result of reducing the amount of prostaglandins in inflammation observed decrease in the sensitivity of chemoreceptors endings afferent neurons of pain sensitivity to bradykinin and histamine. Moreover, reducing the amount of prostaglandins in inflammation leads to decreased production of endogenous bioactive substances involved in the inflammatory response. Thus, metamizole sodium has analgesic effect by reducing the activity of the inflammatory process and reduce the effects of inflammatory mediators on the painful end. Antipyretic effect of the drug is associated with a reduction in the amount of prostaglandins in the center of thermoregulation in the hypothalamus.

Fenpiveriniya bromide - drug group M-anticholinergics, containing in the structure a quaternary nitrogen. The drug relieves spasm of smooth muscle layer of the internal organs, reduces the tone and reduces the motility of the stomach and intestines, relaxes the smooth muscles of the urinary and biliary tract.

When administered orally metamizole sodium is well absorbed in the gastrointestinal tract. In the intestinal wall is hydrolyzed to form a preparation of a pharmacologically active substance, the peak concentrations of the active substance in the blood plasma observed after 30-120 minutes after oral administration.
In parenteral administration, the bioavailability of the drug is approximately 85%.
The active substance is partially bound to plasma proteins. Metabolized in the liver to form pharmacologically active metabolites. Excreted mainly by the kidneys as metabolites, a small portion is derived liver. About 3% of the drug is excreted as unchanged metamizol. The amount of drug which undergoes biotransformation individually for each patient depends on many factors, including the type acetylation genetically determined.
In patients suffering from cirrhosis of the liver, a change in indicators clearance metamizol.

Indications for use:
Spazmalgon drug in tablet form is used for the symptomatic treatment of patients suffering pain or mild to moderate intensity, including the preparation of such diseases is shown:
Urinary tract diseases that are accompanied by pain and urinary disorders, including inflammatory diseases of the urinary system and urolithiasis.
Stomach and intestinal colic, diseases of the digestive tract, which are accompanied by a spasm of smooth muscles of the intestine and stomach and pain.
Biliary dyskinesia, cholelithiasis.
Spazmalgon drug in pill form and is used for the relief of pain weak or moderate intensity in the primary and secondary dysmenorrhea.
If necessary, medication can be used for the symptomatic treatment of pain in patients suffering from diseases of the musculoskeletal system and neuralgia. However, in this case drug is recommended momentarily.

Spazmalgon drug in the form of solution for injection is used for the relief of severe pain syndrome caused by spasms of smooth muscles, including:
Smooth muscle spasm of the ureter and bladder, as well as renal colic, accompanied by pain of mild to moderate intensity.
Diseases of the liver and biliary tract, accompanied by severe pain, including liver (bile) colic, biliary dyskinesia, sphincter of Oddi dysfunction (postcholecystectomical syndrome).
Gastrointestinal disease which are accompanied by pain, spastic nature, including intestinal colic and chronic colitis.
Diseases of the pelvic organs, which are accompanied by pain of mild to moderate intensity.
Relief of pain in primary and secondary dysmenorrhea.

Allergic reactions:
Skin rash, pruritus, urticaria, Stevens-Johnson syndrome, toxic epidermal necrolysis, Lyell's syndrome. In rare cases, noted the development of anaphylactoid reactions, including angioedema and anaphylactic shock. In patients with a tendency to bronchospasm and patients suffering from bronchial asthma, bronchospasm may develop during therapy with the drug Spazmalgon.
In the case of side effects when using the drug Smazmalgon advised to consult a doctor, as some side effects require discontinuation of the drug (including side effects such as renal failure, defects in hematopoiesis and hypersensitivity reactions).

Contraindications:
- Individual hypersensitivity to the drug and other drugs group of non-steroidal anti-inflammatory drugs;
- Increased individual sensitivity to pyrazolone derivatives;
- Suspicion of surgical pathology;
- Violation of the hematopoietic system, including agranulocytosis, leukopenia, aplastic anemia;
- The drug is contraindicated in patients with severe hepatic and / or renal failure, acute hepatic porphyria, and decreased tone of urinary and / or gallbladder;
- The drug is not prescribed to patients suffering from narrow-angle glaucoma, and tachyarrhythmia deficiency of glucose-6-phosphate dehydrogenase;
- Spazmalgon contraindicated in obstruction of the gastrointestinal tract, megacolon, kollaptoidnyh state.

In addition, the drug is not prescribed to patients suffering from BPH, which is accompanied by disorders of urination.
It is not recommended to prescribe a drug to women during pregnancy and lactation, as well as children under the age of 15 years.
The drug is prescribed with caution in patients with hay fever, asthma and allergic rhinitis, as they have an increased risk of hypersensitivity reactions.
The drug is prescribed with caution to patients suffering from diseases of the liver and / or kidney disease, obstructive diseases of the gastrointestinal tract, gastroesophageal reflux disease, decreased tone of the intestine, glaucoma, paralytic ileus, and diseases of the cardiovascular system.
The drug should be used with caution in patients whose work is connected with the management of potentially dangerous machinery and driving.

Pregnancy:
At the moment the data are no reliable data on the safety of the drug during pregnancy.
If necessary, use during lactation is recommended to temporarily stop breastfeeding. Recovery breastfeeding may not earlier than 48 hours after the last dose of drug.

Interaction with other drugs:
Metamizol, part of the drug Spazmalgon, an inducer of enzymes, so the simultaneous use of the drug Spazmalgon with other drugs should take place under the strict supervision of the attending physician.
The drug is not compatible with ethanol, so you need to abstain from alcohol and medication containing alcohol, during therapy with Spazmalgon.
With simultaneous use of the drug reduces the effectiveness of coumarin anticoagulants.
When applied simultaneously with the preparation of phenothiazine derivatives of drugs, including chlorpromazine, there is a risk of severe hypothermia.
Spazmalgon while the application reduces the plasma concentrations of cyclosporine.
Metamizol, members of the drug Spazmalgon, increases the risk of toxic lesions of bone marrow due to receiving chloramphenicol and other drugs with myelotoxic effect.
Barbiturates, phenylbutazone and other inducers of enzymes, while the application reduces the therapeutic effect of metamizol.

With the simultaneous use of the drug with tricyclic antidepressants, allopurinol and oral contraceptives has increased, the toxic effect of metamizol.
Nonsteroidal anti-inflammatory drugs while the use of the drug Spazmalgon increase the risk of side effects.
There is a growing analgesic effect of the drug while the use of tranquillizers and sedatives drugs.
When combined with use of the drug products containing quinine, there is a growing anticholinergic action.
Spazmalgon drug in the form of solution for injection should not be mixed with other injections in the same syringe.
Permitted combinations of drugs Spazmalgon with furosemide, glyburide and giostsinbutilbromidom.

Overdose:
In the application of excessive doses of the drug, patients have symptoms develop metamizolovoy intoxication combined with holinoliticheskimi effects. The most frequently observed in patients develop toxic-allergic syndrome. With further increase in dose, patients have the development of disorders of the gastrointestinal tract and central nervous system.
No specific antidote. If overdose is shown in the form of tablets gastric lavage and receive enterosorbents. If overdose regardless of the form shown in the release event for the speedy elimination of the drug from the body, including forced diuresis, the introduction of water-salt solutions and hemodialysis. If necessary, symptomatic therapy.

smooth muscle spasms, algetic syndrome of any origin: renal colics and other spastic phenomena of urinary tracti, hepatic colics and biliar channels diskinezy
10 tablets
There are no reviews for this product. 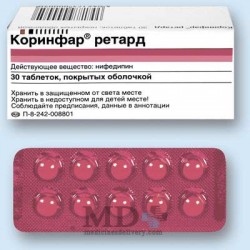